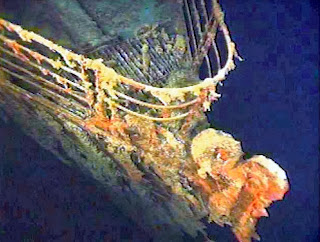 “The ship was sinking but the priests refused to go into the lifeboats. They stayed on the deck, hearing Confessions, helping passengers to climb into the boats and offering whatever support they could until the Titanic finally sank.”

This was a lovely and unexpected tribute from a member of the Titanic Society as he gave a slideshow and talk in Liverpool’s Maritime Museum. Searching through the list of victims of the Titanic, I found the names of several men described as ‘priest/minister’ and one woman, described as ‘missionary’. Of these, three were Catholic priests. All put the safety of others before their own.

The woman, Miss Annie Clemmer Funk, aged 38, went so far as to climb out of the lifeboat in order to allow someone else to take her place! She was the first female Mennonite missionary to India, where she learned Hindi and opened a one-room school for girls. Annie had received a telegram from her father, informing her of her mother’s illness and summoning her home to America. Her memorial records:
'On the night of the sinking, she was asleep in her cabin, was woken by the stewards, dressed and went on deck. She was about to enter a lifeboat, when a woman came from behind, pushing her aside by calling: "My children, My children". The last seat was gone, Annie had to step back. She died in the sinking. Her body, if recovered, was never identified.'

Rev Charles Leonard Kirkland, aged 57, was a Scots Presbyterian minister from Glasgow, Scotland, travelling to visit his sister in Saskatchewan. Kirkland died in the sinking. His body, if recovered, was never identified.

Rev William Lahtinen, aged 30, and his wife Anna died together, their bodies never recovered. When the Titanic collided with the iceberg, Anna initially boarded a lifeboat, but then decided to stay with her husband. Their friend was rescued and later reported that Anna had appeared very nervous, whilst William calmly smoked a cigar.

Rev John Harper, aged 39 and a Baptist minister, was travelling with his daughter Nina. Hours before the collision, he and a friend stood on deck admiring the sunset. "It will be beautiful in the morning," he remarked heading to his cabin. After the collision, Harper awakened his daughter, picked her up and wrapped her in a blanket before carrying her up to A deck. There he kissed her goodbye and handed her to a crewman, who put her into lifeboat 11. Rev Harper went down with the ship.

Revd Ernest Courtenay Carter, 54, was the vicar of St Jude's in Whitchapel, London.
"On the evening of 14 April, Rev Carter presided over a hymn service for about a hundred passengers in the second class dining saloon, he preceded each hymn with a history of the hymn and its author… Marion Wright sang a solo of Lead Kindly Light. Among the other hymns sung were Eternal Father, Strong to Save (also known as For those in peril on the Sea), On the Resurrection Morning, There is a Green Hill Far Away ... The final hymn was Now the Day is Over. Around ten o'clock the steward began to lay out coffee and refreshments and Rev Carter drew the proceedings to a close by thanking the Purser for the use of the Saloon and added that the ship was unusually steady and how everyone was looking forward to their arrival in New York. 'It is' he said 'the first time that there have been hymns sung on this boat on a Sunday evening, but we trust and pray it won't be the last.'
But it was and Rev and Mrs Carter died in the sinking. Their bodies, if recovered, were never identified."

Rev Robert James Bateman was a Baptist Minister, married with seven children.  As he helped his sister-in-law into lifeboat 10, he said, “If I don't meet you again in this world, I will in the next.” He gave her his necktie as a keepsake. She later reported:
"Brother forced me into the last boat, saying he would follow me later. I believe I was the last person to leave the ship. Brother threw his overcoat over my shoulders as the boat was being lowered away and as we neared the water, he took his black necktie and threw it to me with the words, 'Goodbye, God bless you!"

Three Catholic priests were amongst the victims of the Titanic: Frs Peruschitz, Montvila and Fr Byles. A survivor recalled that they offered daily Mass on the voyage. Another remembered seeing them together in the library:
“In the middle of the room are two Catholic priests, one quietly reading... the other, dark, bearded, with a broad-brimmed hat, talking earnestly to a friend in German and evidently explaining some verse in the open Bible before him...”

Another eyewitness report possibly refers to Frs Peruschitz and Montvila as Fr Byles was engaged in guiding steerage passengers towards the deck:
"When all the excitement became fearful all the Catholics on board desired the assistance of priests with the greatest fervour. Both priests aroused those condemned to die to say acts of contrition and prepare themselves to meet the face of God. They led the rosary and others answered. The sound of the recitation irritated a few passengers, and some ridiculed those who prayed and started a ring dance around them. The two priests were engaged continuously giving general absolution to those who were about to die. Those entering the lifeboats were consoled with moving words. Some women refused to be separated from their husbands, preferring to die with them. Finally, when no more women were near, some men were allowed into the boats. Father Peruschitz was offered a place which he declined."

Fr Josef Peruschitz OSB, aged 41, was a German Benedictine monk who taught mathematics, music, physical education and shorthand in the scool attached to his monastery in Scheyern in the Archdiocese of Munich-Freising. In 1912, he was appointed Principal of the Benedictine school in Minnesota, where he was travelling on a £13 second class passenger ticket when the iceberg struck the Titanic. He died in the sinking. His body, if recovered, was never identified.

Fr Juozas Montvila, a Lithuanian, was only 27 when the Czarist regime forbade him to practise his ministry. He decided, therefore, to emigrate to the United States. After the collision, eyewitnesses reported that the "...young Lithuanian priest,  Juozas Montvila, served his calling to the very end" by refusing a place on one of the lifeboats, “choosing to administer his priestly duties and offering solace to his fellow travellers.”

Montvila’s body, if recovered, was never identified. Revered as a hero and martyr in Lithuania, he is currently under consideration for canonization.
Most seems to be known of Fr Thomas Roussel Davids Byles, a 42 year-old Yorkshireman, a convert and the eldest of seven children, who eventually became the parish priest in Chipping Ongar, Essex. A member of the Catholic Missionary Society, Fr Byles was travelling to America for his brother’s wedding. The Titanic held insufficient lifeboats for the number of passengers on board. Frighteningly, there was no provision for steerage passengers, who were expected to fend for themselves. Equally scaring, apparently when bodies were recovered, because of the limited amount of space on board the rescue vessels, those of steerage passengers were merely weighted down with chains! Hence Fr Byles’ assistance of third class passengers stands out as a further act of heroic generosity.

Fr Scott Archer notes in his biography of the priest:
Of the very few passengers willing to brave the cold, Father Byles had been reciting the Breviarium Romanum, fully dressed in his priestly garb, while walking back and forth on the upper deck at the moment the Titanic struck the iceberg. He acted bravely in his capacity as a spiritual leader of men. Descending to the third class and calming the people, Father Byles gave them his priestly blessing and began to hear confessions; after which, he began the recitation of the Rosary. He then led the third class passengers up to the boat deck and helped load the lifeboats. He gave words of consolation and encouragement to the woman and children as they got into the boats. As the danger became even more apparent, he went about hearing more confessions and giving absolution. By all accounts, Father Byles was twice offered a seat in a lifeboat but refused. After the last lifeboat was gone, he went to the after end of the boat deck and led the recitation of the Rosary for a large group kneeling around him of those who were not able to find room in the boats. Father Byles also exhorted the people to prepare to meet God. As 2:20 a.m. approached, and the stern rose higher and higher out of the sea, Father Byles led the more than one hundred people kneeling before him in the Act of Contrition and gave them general absolution.

Other reports add that Fr Byles stayed alive in the icy ocean until shortly before the arrival of the Carpathia, swimming between the people floating in the water and hanging on to wreckage, still offering support and the Sacrament of Reconciliation. Eventually, through sheer exhaustion, he died.
Posted by Sr. Janet at 05:20